The UDC-SA, KIV ADAPTER is an interface adapter designed to transmit one-way serial messages received from a CRYPTO synchronous RS-530 DCE, operating at 1200 bps, to an RS-232 asynchronous DTE at 2400 baud. The adapter is able to determine the beginning and end of a message by searching for selected patterns that frame a message. Because async data is character-oriented, and synchronous data is a continuous sequence of data bits, the device must also align incoming message characters with the outgoing async framing start and stop bits.

The incoming DCD interface signal controls whether any message data is passed. For a complete message to be transmitted the DCD signal must be asserted for the duration of the received message. If at any point the DCD signal drops, the outgoing transmit line will be put in an idle (mark) state.

Assuming DCD is asserted, the UDC-SA, KIV ADAPTER recognizes the start of a message as an occurrence of a triple ASCII pattern. When one of these selected patterns is recognized, the first of the three ASCII character is assembled in an async framed character (1 start bit, and one or more stop bits) and transmitted. With each subsequent 8 bits received, another async character is transmitted. This will continue until an end-of-message (ETX=03h) pattern is recognized in the byte-aligned received data stream. The ETX is transmitted as the last character in the message.

Because the synchronization at the start of a message is three consecutive ASCII characters, there will necessarily be a three-character buffer delay for all messages through the UDC-SA, KIV ADAPTER. To insure that the transmitted DCD is properly aligned with the end-of-message, DCD is also extended for three additional character periods.

User options include the ability to select which of the four available start of message character strings are enabled. Any combination of the four may be enabled through individual dipswitch settings. Another dipswitch selects whether the received data characters are 8-bit with no parity, or 7-bit with odd parity.

The UDC-SA is housed in a sturdy metal enclosure and operates on 110/220VAC.

The UDC-SA has a three year warranty and a 24 hour turnaround on warranty repairs. 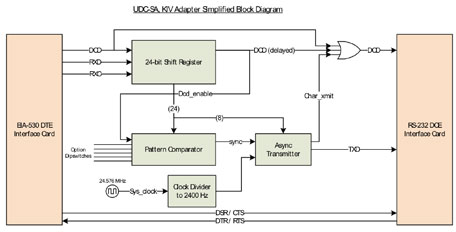